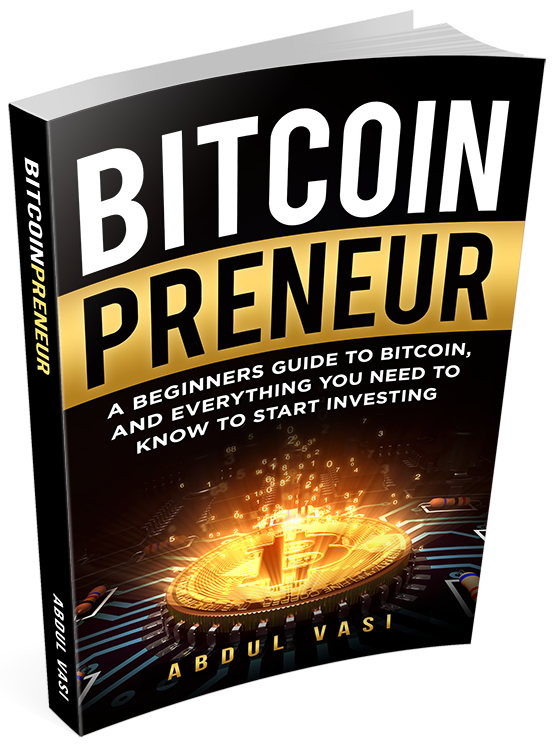 A BEGINNERS GUIDE TO BITCOIN, AND EVERYTHING YOU NEED TO KNOW TO START INVESTING

WHAT YOU WILL FIND IN THIS BOOK

I wrote Bitcoinpreneur as an accessible guide for anyone who is interested in Bitcoin and other cryptocurrencies.Bitcoin is definitely one of the greatest feats that computer science has achieved.

It has enabled people to transact money internationally without the hassles of bank transfer and it also has provided people with a new form of tangible currency. But most importantly, Bitcoin has created ways for everyone to become an entrepreneur and earn easily by making investments.

WHAT PEOPLE ARE SAYING

My friend told me about Bitcoin back in 2017 but I never showed interest as I was sure that it was one of many scam schemes. Then I came across Bitcoinpreneur and my world changed completely. I understood the misconceptions I had and learnt the tricks to make great investments. Hence, here I am enjoying good returns on the investments I made. Thanks, Bitcoinpreneur!

The book introduced me to the world of Bitcoin and the cryptocurrencies properly. I had heard about Bitcoin earlier but I had my own scepticisms about it. But after reading Bitcoinpreneur, I invested in Bitcoin by following the strategies I learnt and my investment has witnessed huge return since then. I am happy to have come across the book

Bitcoinpreneur is truly a great help for anyone looking forward to getting benefitted by making wise investments and I can say that from my personal experience. The beautiful narration and detailed concepts of this book really motivated me to invest in Bitcoin and it immediately witnessed a large increase. The book is a must read in my opinion

Bitcoinpreneur gave me a new direction in life. After graduating from college, I was dying to do something. One day my father gifted me the book and asked me to have a look at what it says. The brilliant writing and easy methodology really mesmerised me. I finished the book and decided to walk on the path that it has shown. I feel so lucky that I was gifted this book as it truly changed my life and showed me that I can become an entrepreneur too with Bitcoin

Bitcoin is a consensus network that enables a new payment system and a completely digital money. It is the first decentralized peer-to-peer payment network that is powered by its users with no central authority or middlemen. From a user perspective, Bitcoin is pretty much like cash for the Internet. Bitcoin can also be seen as the most prominent triple entry bookkeeping system in existence.

Bitcoin is the first implementation of a concept called "cryptocurrency", which was first described in 1998 by Wei Dai on the cypherpunks mailing list, suggesting the idea of a new form of money that uses cryptography to control its creation and transactions, rather than a central authority. The first Bitcoin specification and proof of concept was published in 2009 in a cryptography mailing list by Satoshi Nakamoto. Satoshi left the project in late 2010 without revealing much about himself. The community has since grown exponentially with many developers working on Bitcoin.

Satoshi's anonymity often raised unjustified concerns, many of which are linked to misunderstanding of the open-source nature of Bitcoin. The Bitcoin protocol and software are published openly and any developer around the world can review the code or make their own modified version of the Bitcoin software. Just like current developers, Satoshi's influence was limited to the changes he made being adopted by others and therefore he did not control Bitcoin. As such, the identity of Bitcoin's inventor is probably as relevant today as the identity of the person who invented paper.

Nobody owns the Bitcoin network much like no one owns the technology behind email. Bitcoin is controlled by all Bitcoin users around the world. While developers are improving the software, they can't force a change in the Bitcoin protocol because all users are free to choose what software and version they use.

In order to stay compatible with each other, all users need to use software complying with the same rules. Bitcoin can only work correctly with a complete consensus among all users. Therefore, all users and developers have a strong incentive to protect this consensus.